Following on from the success of our recent paper “Measuring what matters to rare disease patients – reflections on the work by the IRDiRC taskforce on patient-centered outcome measures”, this month we turn the spotlight on cervical dystonia.

Cervical dystonia (sometimes called spasmodic torticollis) is a rare disease affecting between 28–183 /million people. It is characterised by involuntary often painful muscle contractions in the neck area causing abnormal movements and awkward posture of the head and neck.

In recent years, there has been a steady increase in the evaluation of new therapies for cervical dystonia, including five new treatments since 2012 in seven interventional phase I, II or III studies. In addition, further novel treatments are currently in the pipeline of three pharmaceutical companies.

The Cervical Dystonia Impact Profile (CDIP-58) was used in four of these pivotal phase II and III clinical trials in the last five years, as either a primary or secondary outcome measure. The CDIP-58 is also recommended by the International Parkinson and Movement Disorder Society (MDS).

The CDIP-58 is a rare example of a legacy patient reported outcome (PRO) instrument developed based on the core methodologies used routinely by Modus Outcomes as part of our concept-driven measurement approach. 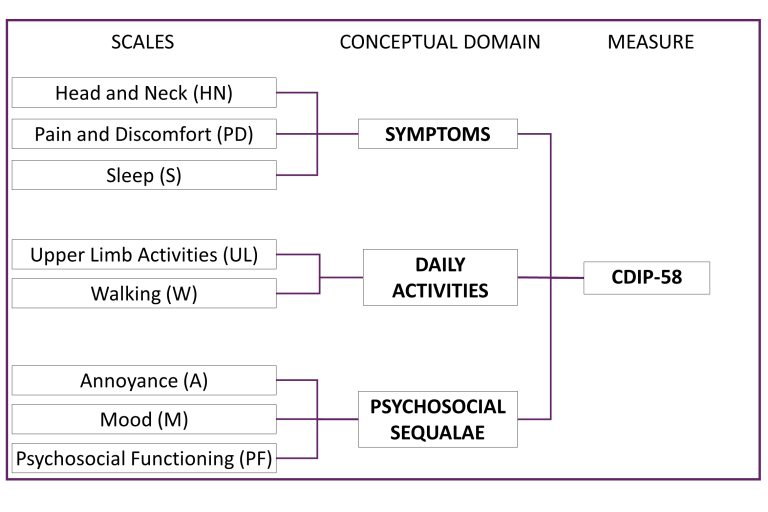 The CDIP-58 was developed by Dr Stefan Cano, our own Chief Scientific Officer, together with a team of internationally renowned research neurologists based at the Institute of Neurology, University College London, UK.

As the CDIP-58 is a PRO instrument close to our hearts, Modus Outcomes is perfectly placed to support its use in current and future clinical trials.

Previous StoryReflections on Patient-Focused Drug Development (PFDD) Public Workshop of December 18, 2017
Next StorySpotlight on … the FACE-Q©
We use cookies on our website to give you the most relevant experience by remembering your preferences and repeat visits. By clicking “Accept All”, you consent to the use of ALL the cookies. However, you may visit "Cookie Settings" to provide a controlled consent. You can read our General Privacy Notice here.
Cookie SettingsAccept All
Manage consent

You can read our complete General Privacy Notice here. This website uses cookies to improve your experience while you navigate through the website. Out of these, the cookies that are categorized as necessary are stored on your browser as they are essential for the working of basic functionalities of the website. We also use third-party cookies that help us analyze and understand how you use this website. These cookies will be stored in your browser only with your consent. You also have the option to opt-out of these cookies. But opting out of some of these cookies may affect your browsing experience.
Necessary Always Enabled
Necessary cookies are absolutely essential for the website to function properly. These cookies ensure basic functionalities and security features of the website, anonymously.
Functional
Functional cookies help to perform certain functionalities like sharing the content of the website on social media platforms, collect feedbacks, and other third-party features.
Performance
Performance cookies are used to understand and analyze the key performance indexes of the website which helps in delivering a better user experience for the visitors.
Analytics
Analytical cookies are used to understand how visitors interact with the website. These cookies help provide information on metrics the number of visitors, bounce rate, traffic source, etc.
Advertisement
Advertisement cookies are used to provide visitors with relevant ads and marketing campaigns. These cookies track visitors across websites and collect information to provide customized ads.
Others
Other uncategorized cookies are those that are being analyzed and have not been classified into a category as yet.
SAVE & ACCEPT
Powered by